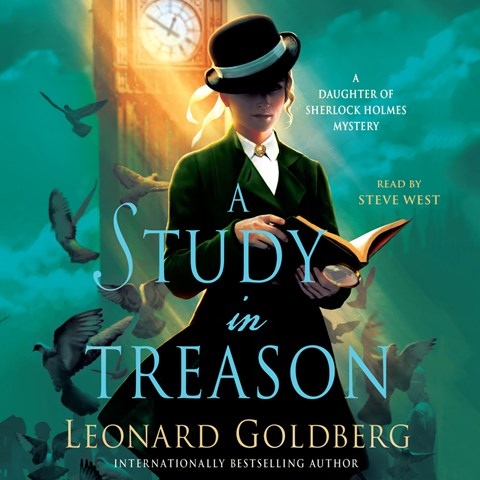 A STUDY IN TREASON The Daughter of Sherlock Holmes, Book 2

The second in the Daughter of Sherlock Holmes series shows Joanna Blalock, daughter of Holmes and Irene Adler, at the top of her detecting game. Narrator Steve West is quite amazing transforming himself into Dr. Watson, his son and, most impressively, into Joanna. It's 1914, Joanna is married to Dr. John Watson, Jr., and the game's afoot for the clever threesome. A new treaty with France has been stolen from the Duke of Winchester's well-guarded study. West delivers credible characters--from Inspector Lestrade to the Baker Street Irregulars. Taking listeners on a thoroughly enjoyable romp, West recounts Joanna's discovery of a secret attic space where someone could have hidden. Joanna solves the case using the deductive reasoning that her father made famous. Don't miss the fun. S.J.H. © AudioFile 2018, Portland, Maine [Published: AUGUST 2018]