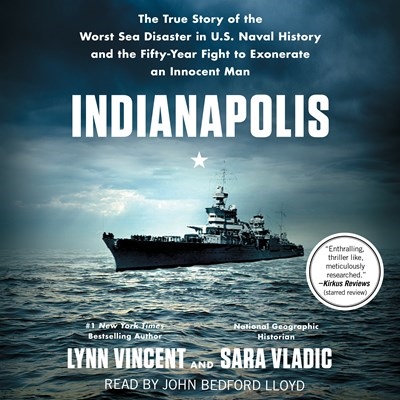 INDIANAPOLIS The True Story of the Worst Sea Disaster in U.S. Naval History and the Fifty-Year Fight to Exonerate an Innocent Man

The sinking of the USS INDIANAPOLIS during WWII and the survival of its 300-plus crew members in shark-infested water are so compelling that no false drama in the narration is needed. John Bedford Lloyd wisely lets the story carry the listener along. His tone is even but not without emotion, and the survivors’ stories are harrowing and compelling. The author focuses on more than the sinking, though. He provides backstories of the ship, several of the crew, and the Japanese submarine commander who sank the Indy. The author carries the story past the war to describe the survivors’ ultimately successful effort to clear the name of their skipper, who was court-martialed for the sinking. R.C.G. © AudioFile 2018, Portland, Maine [Published: OCTOBER 2018]