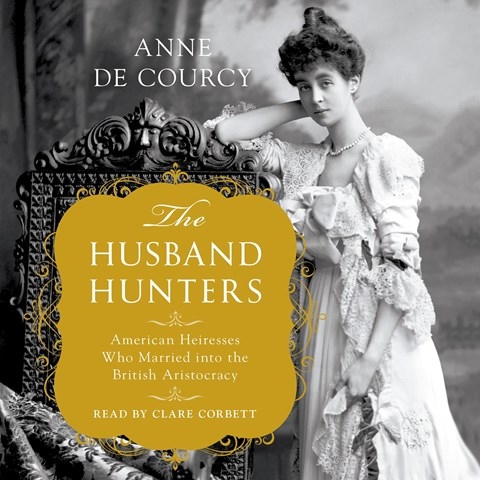 THE HUSBAND HUNTERS American Heiresses Who Married into the British Aristocracy

Narrator Clare Corbett meets the challenges of this nonfiction account of the Gilded Age phenomenon of American women marrying into British nobility. More than the story of a handful of cross-Atlantic relationships, the audiobook explores the salient differences between American and British culture in terms of women's issues, class systems, and finances. Corbett clearly differentiates narrative from quotations and enlivens dialogue by creating distinct voices for each person. The daughters of American robber barons were often criticized at home for marrying abroad, but their dowries bolstered titled families, and their children, like Winston Churchill, often became great leaders. Corbett's lively performance and clear diction help listeners understand the complicated social rules underlying the splendor of the world's richest as they vied for the perfect spouse. C.B.L. © AudioFile 2018, Portland, Maine [Published: OCTOBER 2018]