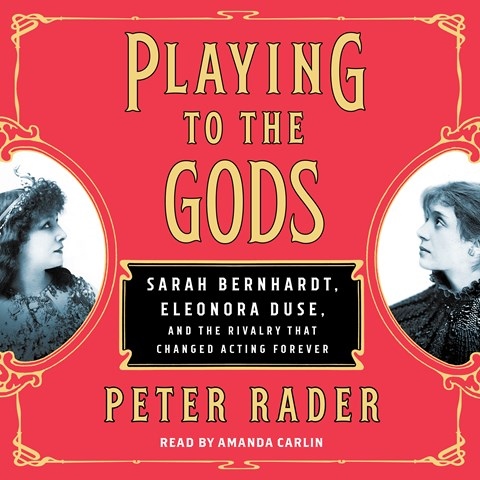 PLAYING TO THE GODS Sarah Bernhardt, Eleonora Duse, and the Rivalty that Changed Acting Forever

The daughter of an unmarried Jewish courtesan, Sarah Bernhardt (18441923), and the daughter of Italian troubadours, Eleonora Duse (18581924), became the most famous actresses of their day. Amanda Carlin's performance offers a treasure trove of anecdotes revealing the not-so-secret feud between them. Bernhardt was as flamboyant offstage as she was mesmerizing on it. She kept a pet alligator, was sexually uninhibited, and was reputed to sleep in a coffin. Duse was her polar opposite. Her acting was natural and understated, a revolutionary approach for nineteenth-century audiences used to highly stylized acting. Critics began to call Bernhardt's acting dated. Carlin's spot-on portrayal of these women who stole each other's lovers, wooed each other's playwrights, and stole roles from each other makes for highly entertaining listening. S.J.H. © AudioFile 2018, Portland, Maine [Published: SEPTEMBER 2018]