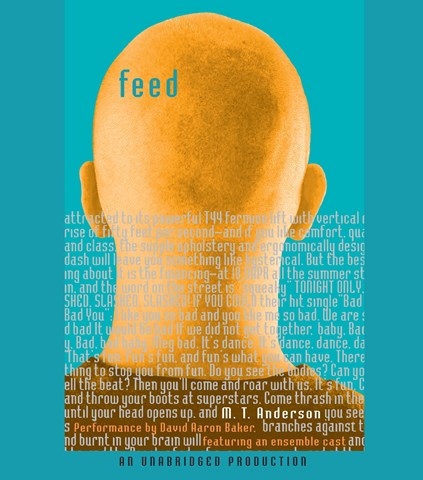 Enter a chilling, twisted future in which one’s every thought and movement is directed and regulated by the “feed,” a computer chip implanted in the brain. This dystopia is seen through the eyes of teenagers: some who embrace the feed and revel in its unbridled consumerism, and one who rails against society’s rampant ignorance and banality. David Aaron Baker’s superb use of inflection renders the teen voices realistic, from their vapid musings to profane outbursts that substitute for conversation. The ensemble cast, representing the cacophony of the feed, resembles the worst of today’s inane commercials. This brilliant production for older teen listeners enhances Anderson’s portrait of a world gone sour, in which even the adults have forgotten how to use language, and everything is dying, including the kids. S.G. Winner of AudioFile Earphones Award, Winner of 2004 ALA/ YALSA Recording, 2004 Audie Award Finalist © AudioFile 2003, Portland, Maine [Published: OCT/ NOV 03]