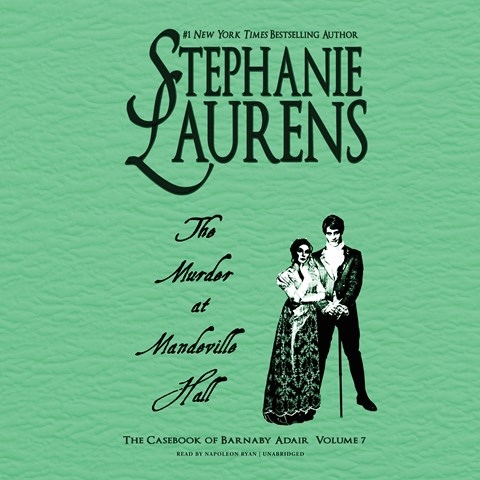 THE MURDER AT MANDEVILLE HALL Casebook of Barnaby Adair, Book 7

In this seventh in the Casebook of Barnaby Adair series, narrator Napoleon Ryan shines. With his deep, rich voice, Ryan sounds like the epitome of the elegant British aristocrat as he portrays Alaric, Lord Carradale, who stumbles upon the body of a young woman while attending a country house party. Aided by tall, headstrong Constance Whittaker, he must solve the murder before the house party disperses or the murderer strikes again. Thankfully, Scotland Yard arrives, along with consultants Barnaby Adair and his wife, Penelope. Ryan's use of a whispery, higher pitched voice for Constance is convincing and interesting. Stephanie Laurens never disappoints and when paired with a narrator who is a master of his craft, the result is wonderfully entertaining. A.C.P. © AudioFile 2018, Portland, Maine [Published: NOVEMBER 2018]