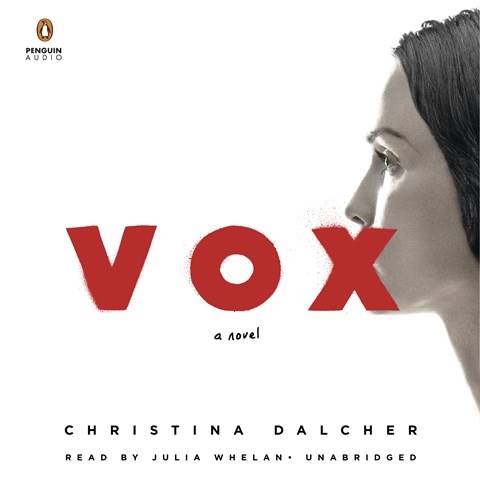 Narrator Julia Whelan brings this realistic, thought-provoking debut to life with heart. She is the voice of Dr. Jean McClellan, once a renowned scientist, now a mostly mute, angry wife and mother who is looking for a way to reclaim her voice and personhood. Whelan expresses a range of emotions: regret for past disengagement, fear as she contemplates her daughter's life without a voice, and determination to fight back in a nation that silences and sidelines half its population. Whelan gives husband Patrick a meek voice peppered with endearments as he encourages Jean to "go along to get along." Son Steven expresses the arrogance of youth as he spouts the propaganda that is passing for education at school. A frighteningly believable story that ends with hope. N.E.M. Winner of AudioFile Earphones Award © AudioFile 2018, Portland, Maine [Published: AUGUST 2018]