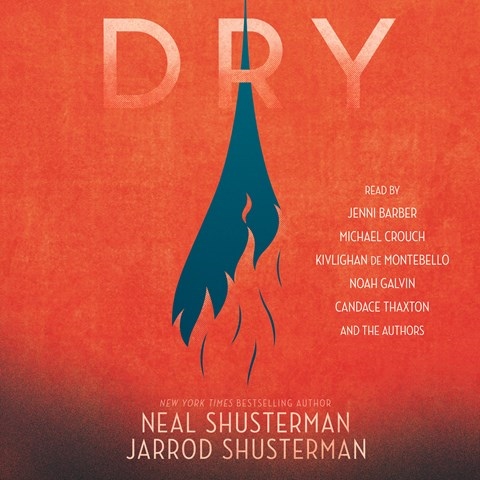 Multiple narrators and alternating perspectives underscore the volatility of this speculative story about a group of teens who are trying to survive the "Tap-Out," a catastrophic water shortage in Southern California. Jenni Barber anchors the cast with her youthful yet determined portrayal of Alyssa, a sensible suburban girl who is the story's moral center. She's joined by Michael Crouch as Henry, a smooth-talking opportunist; Noah Galvin as Kelton, the awkward prepper next door; Candace Thaxton as Jacqui, a street-smart older girl; Kivlighan de Montebello as Garrett, Alyssa's younger brother; and the authors, who offer serious verbal snapshots of the Tap-Out's disturbing effects. The narrators ratchet up their pacing and intensity as the characters face increasingly grueling challenges, turning this survival thriller into a white-knuckle listening experience. R.A.H. © AudioFile 2018, Portland, Maine [Published: OCTOBER 2018]