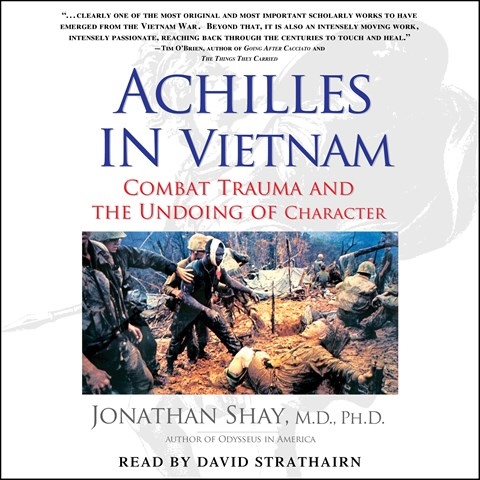 ACHILLES IN VIETNAM Combat Trauma and the Undoing of Character

David Strathairn gives an excellent narration of this fascinating and insightful look at how war affects the psyches of men. The author looks closely at Homer's ILIAD, and, to a lesser extent, at other accounts of men in battle. Drawing on his own experience of counseling combat veterans of the Vietnam War, Shay compares instances of grief, betrayal, and "going berserk," among other battle behaviors in the ILIAD, with what his patients have undergone. Ultimately, he finds that, truly, "there's nothing new under the sun." Strathairn's delivery of narrative has a somewhat staccato intonation, similar to that of a news reporter. He's precise and easy to follow when speaking, and his clear voice adds dramatic effects as needed. M.T.F. © AudioFile 2019, Portland, Maine [Published: MARCH 2019]