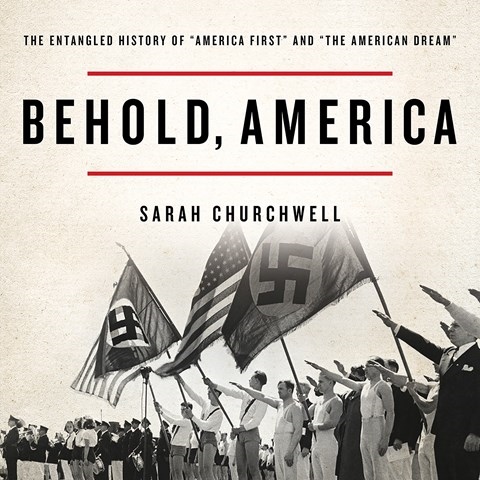 BEHOLD, AMERICA The Entangled History of "America First" and '"The American Dream"

Anne Twomey's narration effortlessly knits the twin threads--America First and the American Dream--that animate this history. She adroitly shares the despicable actions of the KKK and the terrible stories of lynchings and horrific crowd behavior. The listener is reminded that America First, despite its attracting well-known Americans, was often used as a cover for racism and anti-Semitism. Author Churchwell also examines the development of the term "the American dream," exploring its original meaning of equality of opportunity and describing how it has turned into a synonym for material wealth. There are villains--Charles Lindbergh, Father Coughlin--and heroes, too. Writers Walter Lippmann and Dorothy Thompson both warned fellow citizens in the 1930s about fascism and decried America First. A.D.M. © AudioFile 2019, Portland, Maine [Published: FEBRUARY 2019]