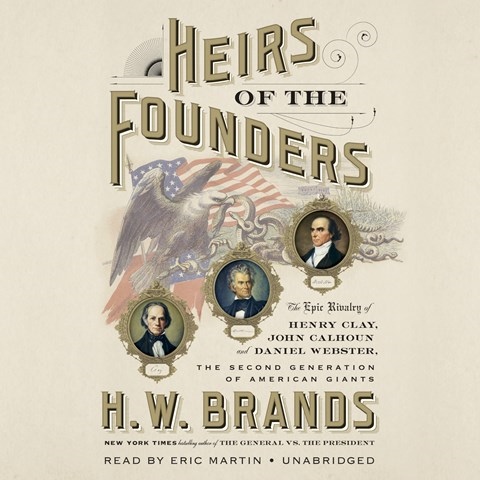 HEIRS OF THE FOUNDERS The Epic Rivalry of Henry Clay, John Calhoun and Daniel Webster, the Second Generation of American Giants

This tripartite history looks at the lives of Daniel Webster of Massachusetts, Henry Clay of Kentucky, and John Calhoun of South Carolina. Eric Martin does well in narrating how these three were able for decades to hammer out compromises that allowed the competing interests of the North and South to maintain the Union and work somewhat together to complete the work of the Founding Fathers. Eventually, however, the addition of territories out west and their resultant settlement made compromise impossible. Martin's resonant voice gives a splendid presentation of this account. His pacing is deliberate but not plodding. He is dispassionate and understated in delivery, which suits the text well. M.T.F. Â© AudioFile 2019, Portland, Maine [Published: JANUARY 2019]