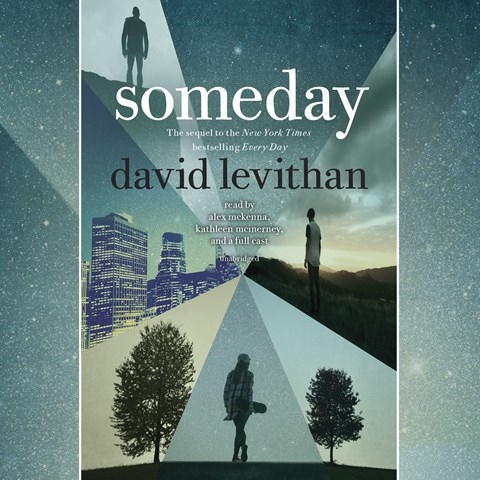 In this thoughtful sequel to EVERY DAY and ANOTHER DAY, narrators Alex McKenna and Kathleen McInerney reprise their roles as "A," a body-hopping "traveler," and Rhiannon, the girl "A" loves. Both ably portray the frustration and sincerity of the star-crossed couple, with McKenna's raspy tones flexing to accommodate the diverse experiences of "A's" body hosts, including a breathlessly performed manic episode. Rounding out the cast are Robbie Daymond as Nathan, one of "A's" former hosts; Will Damron as "X," a menacing mercenary traveler who is searching for "A"; and a sizable roster of supporting narrators whose interstitial scenes broaden the series' speculative scope. Though the narrative occasionally stumbles beneath its own introspective weight, the shifting narrators will keep listeners engaged. R.A.H. © AudioFile 2018, Portland, Maine [Published: NOVEMBER 2018]