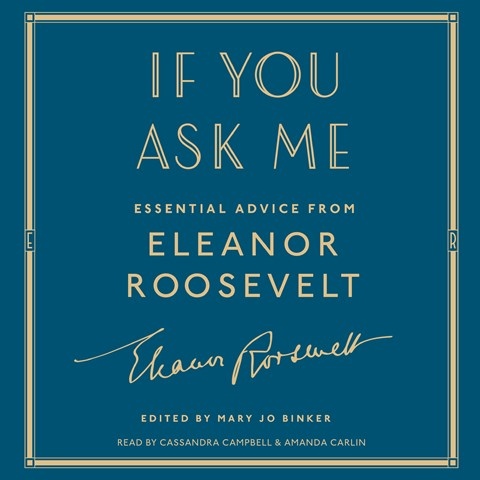 IF YOU ASK ME Essential Advice from Eleanor Roosevelt

During the early 1940s, in her last term as first lady, Eleanor Roosevelt began writing an advice column for a ladies' magazine, a vocation she continued for 20 years. This collection of her straight-talking answers to some of her readers' questions is narrated by Amanda Carlin in a sturdy matronly tone; the introduction and chapter preambles are smoothly presented by Cassandra Campbell. Carlin's voice doesn't necessarily resemble Mrs. Roosevelt's upper-class speech, but Carlin admirably represents the solemn, direct manner for which the first lady was known. She adds warmth to Mrs. Roosevelt's more empathetic answers--for example, advice to a girl who feels self-conscious about her appearance--and bold insistence when addressing Mrs. Roosevelt's passionate concern about equality. Her occasional forays into subtle humor are a delight. N.M.C. © AudioFile 2019, Portland, Maine [Published: JANUARY 2019]