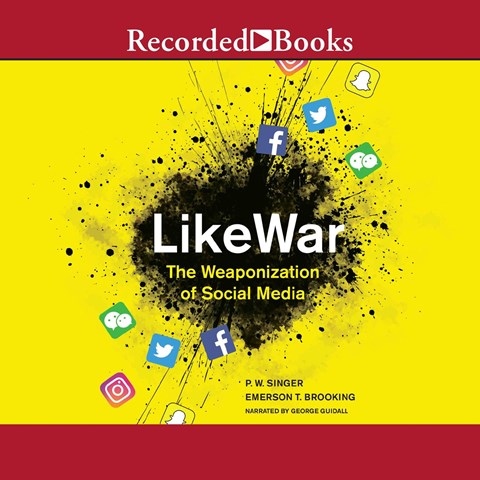 LIKEWAR The Weaponization of Social Media

George Guidall's sage narration conjures avuncular newscasters like Walter Cronkite and David Brinkley, old-school journalists whose discerning delivery earned trust. And trust is what's needed in this audiobook about the use of social media as a battleground. The authors demonstrate how Facebook, Instagram, and others enable geopolitical forces to target and mislead users. For example, using "brand engagement" techniques learned from Taylor Swift, ISIS was able to recruit alienated youth, and Donald Trump capitalized on his Twitter marketing for "The Apprentice" to build the base that elected him president. The takeaway--things don't necessarily need to be true as long as they're believed--has also been put into action by fighters in Mosul, Russian and Iranian hackers, and in the Brazilian election of 2016. R.W.S. © AudioFile 2019, Portland, Maine [Published: JANUARY 2019]