Home»Reviews»A KNIFE IN THE FOG 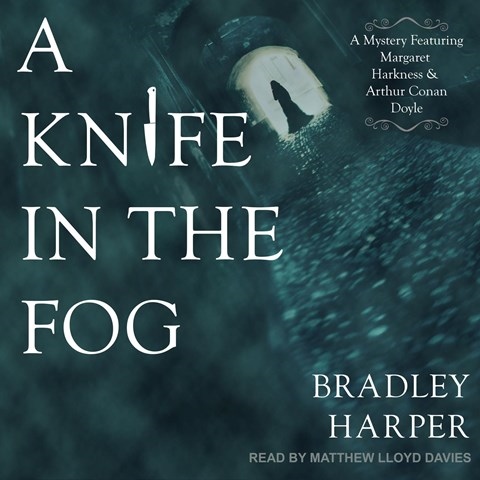 Matthew Lloyd Davies provides an expert narration of Bradley Harper's first outing in an exciting new series. It's 1888. After A STUDY IN SCARLET, Arthur Conan Doyle swears off writing anymore crime stories. He is summoned to London by Prime Minister Gladstone to assist in solving the Whitechapel murders and finding Jack the Ripper. Doyle calls upon his mentor, forensic expert Joseph Bell, the model for Holmes, and crusading journalist Margaret Harkness. They begin interviewing witnesses and suspects in London's sleazy East End. Davies portrays everyone from the posh to the poverty-stricken with assurance and credibility. His nuanced delivery highlights class prejudices and misconceptions. Holmes fans have a treat in store, thanks to Harper's original story and Davies's superb performance. S.J.H. Winner of AudioFile Earphones Award © AudioFile 2019, Portland, Maine [Published: MARCH 2019]