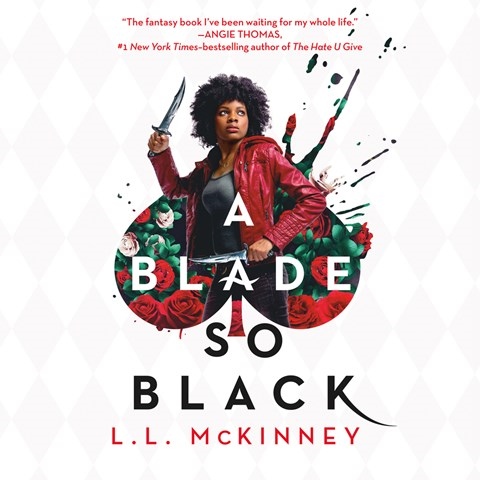 A BLADE SO BLACK Blade So Black, Book 1

Narrator Jeanette Illidge sets the perfect tone in this reimagined urban fantasy based on the classic ALICE IN WONDERLAND. Young, black teen Alice is living a normal life, but everything changes when she crosses paths with a young lad named Addison Hatta, who saves her from being attacked by a devilish creature called "Nightmare." Soon, she takes on saving the world herself, along with the fairytale-like realm known as Wonderland. When Addison is poisoned, Alice must venture deep into Wonderland to find the antidote. Although the written narrative is lackluster in some instances, Illidge elevates it with her multifaceted and authentic portrayal of the characters. Whether she's delivering Russian, English, or Ebonics, her voice and accent are varied. This debut lays the groundwork for a sequel. A.C. © AudioFile 2018, Portland, Maine [Published: DECEMBER 2018]