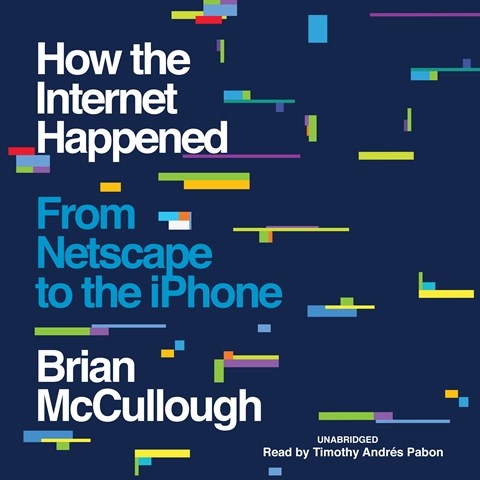 HOW THE INTERNET HAPPENED From Netscape to the iPhone

McCullough's history of technology focuses on the intersection of the personal computer and the network, predominantly focusing on the launch of internet networks (Netscape, AOL, Prodigy) and ending with the rise of todays' big-tech players (Amazon, Google, Apple). Narrator Timothy Andrés Pabon's voice provides a sense of wonder and enthusiasm, which capture the overwhelmingly sunny tone of McCullough's prose. However, his energy is not equally distributed, and there are some passages where the narration falls flat. McCullough's work will strike chords of nostalgia for those who stumbled onto the web in the 1980s and '90s while providing a strong understanding for those who missed the rise but enjoy the ubiquity of the internet in the 21st century. L.E. © AudioFile 2019, Portland, Maine [Published: JANUARY 2019]