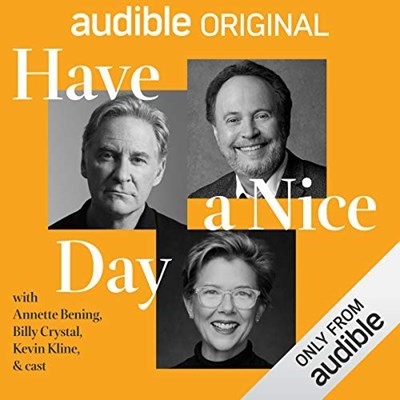 HAVE A NICE DAY

In this ensemble production featuring several prestigious actors, the story opens on the last day in the life a man who happens to be the president (Kevin Kline). When an Angel of Death (Billy Crystal) visits him in the middle of the night, President Murray negotiates a short extension to his demise so he can salvage his relationships with his wife (Annette Bening) and daughter (Auli'i Cravalho) and secure his political legacy. The production is a live performance, and the audience’s laughter adds to the aural experience. The only disappointing performance comes from the narrator (Dick Cavett), whose inflections frequently are mismatched with the scene he describes. With so many well-known actors in the cast, it isn’t surprising that this is an excellent listen. A.L.S.M. © AudioFile 2019, Portland, Maine [Published: JANUARY 2019]