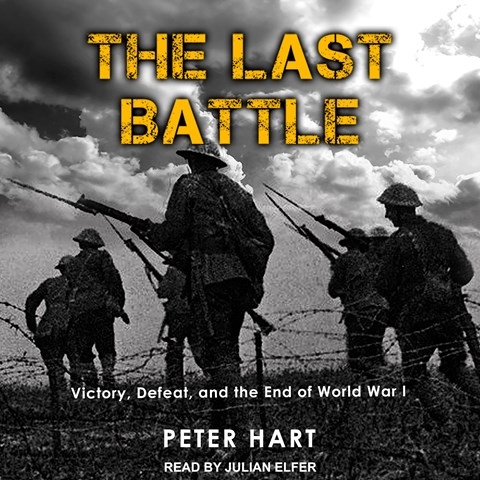 THE LAST BATTLE Victory, Defeat, and the End of World War I

Even a full century on, listening to this history of the final months of WWI demands a certain fortitude as the ear takes in the awful toll of weariness, squalor, and endless, pointless slaughter. Probably this is a title primarily for history and WWI buffs. The narrative is compelling, well researched, and dramatically told, illuminating a less familiar stage of the great war. The author's perspective is intentionally British, and in that Julian Elfer is an effective narrator. To American ears, however, his British vowels and stresses often blur the line between syllables, making him difficult to understand. Yet his polished diction captures the unbending resolve that brought the British and their allies finally to victory. D.A.W. © AudioFile 2019, Portland, Maine [Published: JANUARY 2019]