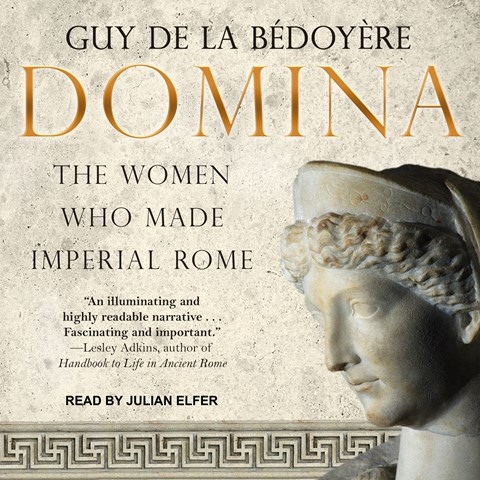 DOMINA The Women Who Made Imperial Rome

Julian Elfer brings a fine voice, a likable British accent, skill, and obvious intelligence to his performance of a book about the often sensational role of women in two of the Roman Empire's wildly dysfunctional dynasties. That sounds promising yet fails to satisfy. Early in the book, de la Bédoyère follows themes rather than sequence, jumping confusingly around in history--then plunges into the intensely complex Julio-Claudian dynasty, a snake pit of similar, even identical, names. Elfer narrates clearly (usually) but too quickly, especially for this material. His manner and occasional small misreadings give the impression of someone trying to get through the material rather than engage with it. There is much to learn here, and things to like, but also much cause for listener frustration. W.M. © AudioFile 2019, Portland, Maine [Published: JUNE 2019]