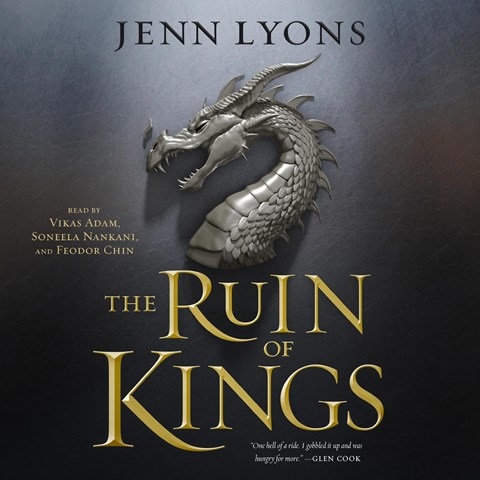 THE RUIN OF KINGS The Godslayer Cycle, Book 1

A trio of talented narrators tackles the first book in a new fantasy series centered on a man who is destined to destroy an empire. The novel is framed as a story within a story in which Kihrin, portrayed by Vikas Adam, tells his tale to his female captor, a shape-shifting and deadly assassin, portrayed by Soneela Nankani, as she recounts the events leading up to his capture. A third narrator, Feodor Chin, interjects humorous asides. Adam and Nankani capably imbue their characters with depth, but Chin is overshadowed by their vocal range. Nonetheless, the trio complement each other and elevate an unconventional story filled with intense world-building and vivid characters. J.M.M. © AudioFile 2019, Portland, Maine [Published: APRIL 2019]