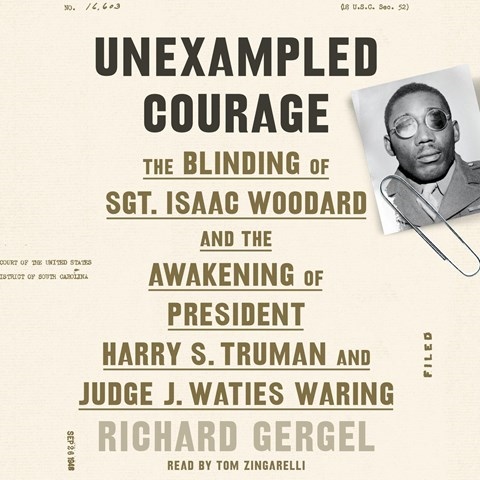 Tom Zingarelli has a sonorous, even tone as he narrates an important story that demands outrage. Isaac Woodard was an African-American soldier returning home from war in 1945 when he was removed from a bus in South Carolina and savagely beaten by a police chief until he was permanently blinded. The trial of Woodard's attacker got the attention of President Truman, and it changed the career trajectory of the presiding judge, Waites Waring, who watched the all-white jury acquit the officer. Waring was so galvanized that he became active in the Civil Rights movement and school desegregation. Zingarelli's fine narration animates this story of how a disgraceful crime that blinded one man opened the eyes of two others who could make a difference. D.B. © AudioFile 2019, Portland, Maine [Published: FEBRUARY 2019]