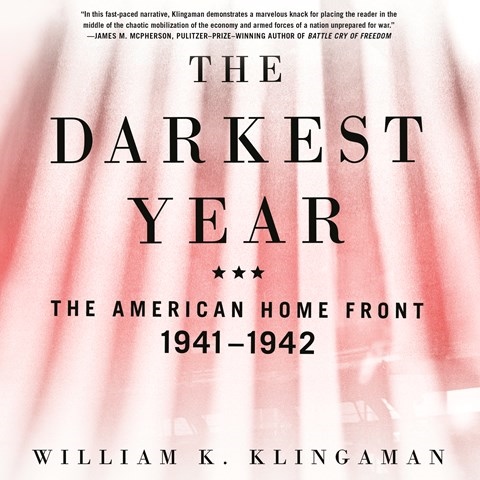 Stefan Rudnicki's sober narration of this well-written account conveys an anxiety-filled 12 months in American history. December 1941 through December 1942, the first year the U.S. was part of WWII, was the "darkest year" of that conflict for Americans. Looking closely at the day-to-day lives of Americans on the homefront, Klingaman's work does not flinch from noting the many blunders and the outright incompetence displayed by the country's civilian and military leaders during this time. We see a country's psyche undergo great stress as it switches from a peacetime to a wartime economy and adjusts to all the other changes brought about by the war. Rudnicki's deep and somewhat gravelly voice is easy to understand. He is expressive when reading narrative and gives a nuanced delivery of quotes and dialogue. M.T.F. © AudioFile 2019, Portland, Maine [Published: MARCH 2019]