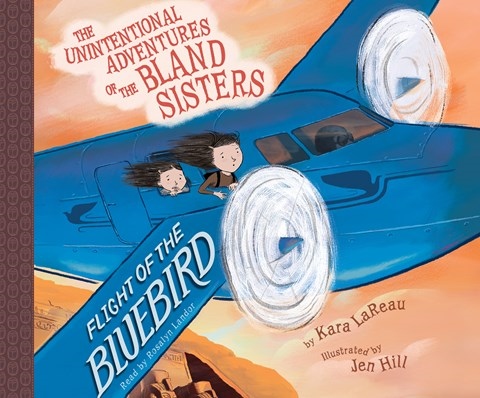 FLIGHT OF THE BLUEBIRD The Unintentional Adventures of the Bland Sisters, Book 3

Narrator Rosalyn Landor reprises her roles as Jaundice and Kate, and creates a host of new characters in this third audiobook in the Bland Sisters series. The sisters are flying from Morocco to Egypt to uncover the mysteries of a magical scarab. Foiling multiple attacks along the way, they also discover the true history of their parents before being reunited with them. Landor's narrative voice sounds like that of a proper British teacher, providing a humorous contrast to the array of eccentric characters and tongue-in-cheek references to Peter Lorre and Humphrey Bogart, which adults will recognize from CASABLANCA. Also memorable are the gentle tone and slightly foreign accent of the girls' Egyptian mother and the no-nonsense tone of daring aviatrix Beatrix Airdale. S.C. © AudioFile 2019, Portland, Maine [Published: FEBRUARY 2019]