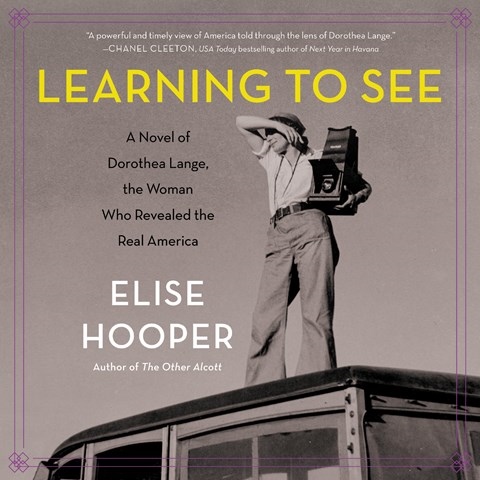 LEARNING TO SEE A Novel of Dorothea Lange, the Woman Who Revealed the Real America

Cassandra Campbell's sensitive narration of this novel tells the moving story of documentary photographer Dorothea Lange, whose iconic images of poor and migrant people during the Great Depression brought a human element to a tragic period in U.S. history. Arriving in San Francisco in 1918 at the age of 22, Lange was determined to support herself and quickly became a successful portrait photographer. Campbell's expressive voice embodies the indignation Lange felt at many people's dire economic circumstances in the 1930s, which led to her work for the U.S. government documenting destitute migrant families and, later, Japanese-Americans living in internment camps. Campbell's equally warm and sympathetic voice reflects Lange's guilt and self-doubt as her health began to fail and her children suffered as she put her work before all else. J.E.S. © AudioFile 2019, Portland, Maine [Published: FEBRUARY 2019]