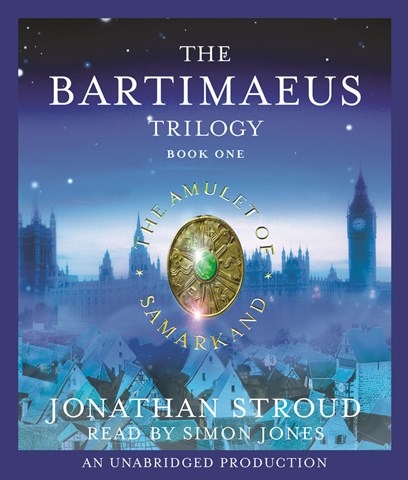 THE AMULET OF SAMARKAND The Bartimaeus Trilogy, Book 1

Bartimaeus, a five-thousand-year-old djinni, possesses abilities far beyond those of an extraordinarily talented magician. Simon Jones excels at projecting the personality characteristics of someone who has seen and done it all: sarcasm, facetiousness, and dry wit. Jones’s narration easily balances this cynicism against his portrayal of Nathaniel, an 11-year-old apprentice magician who has called up Bartimaeus to avenge himself against a brutal magician, Simon Lovelace. Nathaniel can summon Bartimaeus, but can he control him? The story is the told from a fresh viewpoint that will attract any listener with a yen for intelligent and humorous fantasy. E.J.F. Winner of AudioFile Earphones Award, 2004 YALSA Selection © AudioFile 2004, Portland, Maine [Published: APR/MAY 04]