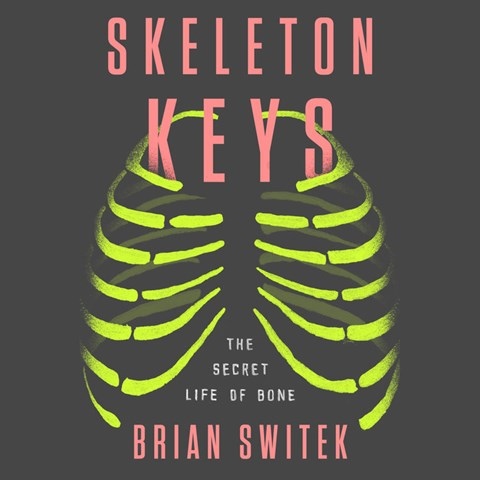 by Brian Switek | Read by Will Damron

Narrator Will Damron gives the opening anecdote of this audiobook the tone of a true-crime story. It's not a murder case, but a would-be suicide stopped by an ossified larynx. The author, who has worked with paleontology field crews, tells the story of life's rise from the sea as seen in a tiny doodle of a fossil that had an early spine and skeletal system. Damron keeps up the dramatic tone through a tour of the Mutter Museum, Philadelphia's medical museum; California's La Brea Tar Pits; and other macabre sites. But mostly he captures the author's curiosity and enthusiasm as he takes on such questions as how to keep astronauts' bones from losing mass on the long trip to Mars. J.A.S. © AudioFile 2019, Portland, Maine [Published: MAY 2019]