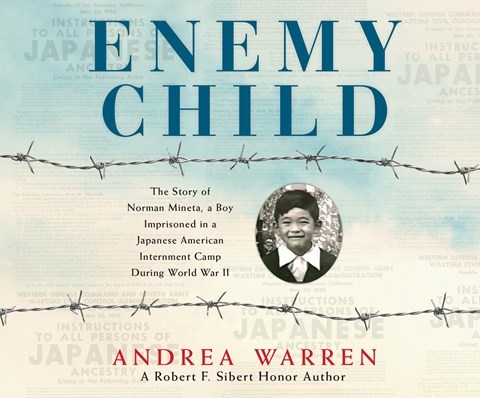 ENEMY CHILD The Story of Norman Mineta, a Boy Imprisoned in a Japanese American Internment Camp During World War II

Caroline McLaughlin narrates the story Congressman Norman Mineta's WWII experience in a serious tone. In response to war hysteria and anti-Japanese sentiment, the U.S. government imprisoned more than 100,000 Japanese-Americans in hastily constructed internment camps. Many were U.S. citizens. In 1941, fourth-grader Norman, his parents, and his four siblings were forcibly removed from their California home. With gravity, McLaughlin reads Mineta's remembrances of his family's life within the single room they were allotted in their barracks at Montana's Heart Mountain War Relocation Center. Her subdued tones and precise manner convey the stoicism with which internees endured years of privation in the many camps across the country. As a congressional representative, Mineta later worked to restore honor to these citizens. L.T. © AudioFile 2019, Portland, Maine [Published: MAY 2019]