Home»Reviews»THEODORE ROOSEVELT FOR THE DEFENSE 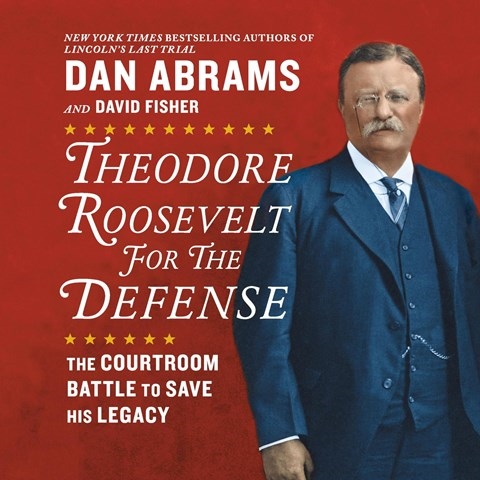 Author Dan Abrams reads his introduction, and the rest of this audiobook is narrated by Roger Wayne. The similarity of their voices is striking. Wayne does a first-rate job with this fascinating account of a little-known libel suit involving former President Theodore Roosevelt. New York Republican Party Chairman William Barnes sued Roosevelt in 1915 for saying that Barnes was a "political boss of the most obnoxious type." He asked for $50,000 in damages. Wayne helps create the suspenseful and emotionally fraught mood of the courtroom--with all of Roosevelt's larger-than-life personality on display. The dialogue and courtroom interrogations are vividly brought to life, making this a thrilling listen, especially for history lovers. D.G.P. 2020 Audies Finalist © AudioFile 2020, Portland, Maine [Published: FEBRUARY 2020]