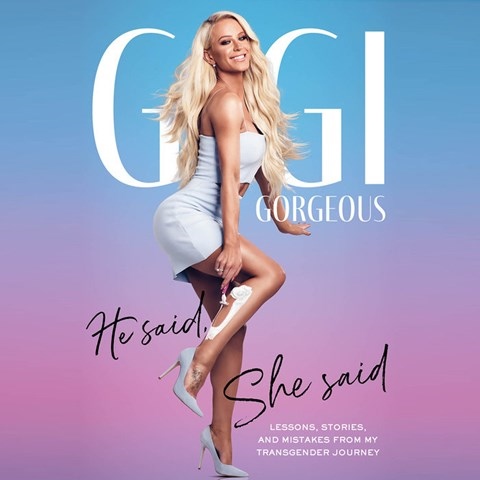 HE SAID, SHE SAID Lessons, Stories, and Mistakes from My Transgender Journey

YouTube lifestyle vlogger Gigi Gorgeous's vivacious personality and candor illuminate her narration. Before launching into her memoir, Gigi shares a glossary of "Gigi-isms" for listeners unfamiliar with the words that pepper her speech, which include "everything," "hundo P," and "eek-a-deek." Growing up in Toronto, Gigi struggled with gender identity and sexuality, coming out first as a gay boy, then transitioning to a trans woman after high school, and later coming out as a lesbian. Her forthright tone invites listeners further into her confidence as she discusses her family relationships, romance with Nats Getty, and evolving career. She also shares personal aspects of her transition, reminding people that this process is not the same for everyone. A "Cast of Characters" at the end emphasizes important individuals in her life. J.R.T. © AudioFile 2019, Portland, Maine [Published: JUNE 2019]