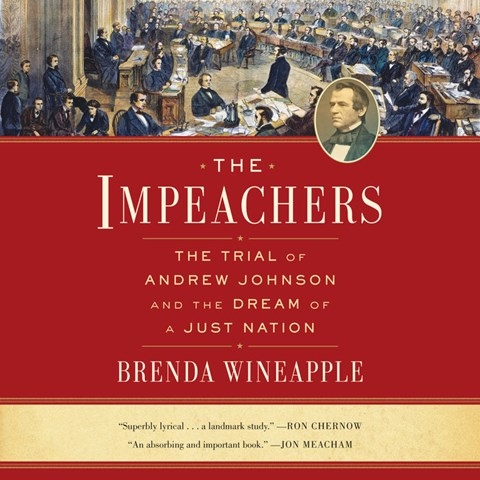 Gabra Zackman's exceptional narration engages listeners with this impressively researched history of the 1868 impeachment proceedings against President Andrew Johnson. Despite the audiobook's broad scope, Zackman moves easily between topics to create an accessible and seamless listening experience. She sounds genuinely interested as she delivers legal and constitutional arguments; condensed biographies of notable figures, including the crusading Representative Thaddeus Stevens, the capable Secretary of War Edwin Stanton, and the ambitious Chief Justice Salmon Chase; and the behind-the-scenes intrigue of the first-ever presidential impeachment trial in the Senate. While Zackman's voice is steady and confident overall, her tone carries a strong measure of outrage when depicting horrific acts of violence perpetrated against black citizens in the post-Civil-War era. M.J. Winner of AudioFile Earphones Award © AudioFile 2019, Portland, Maine [Published: JULY 2019]