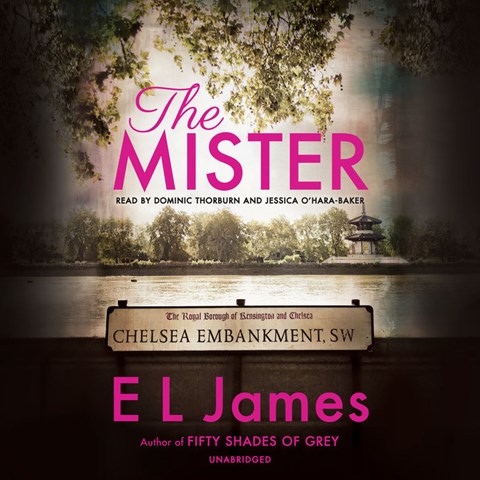 A sensitive, skillful narration elevates this E L James novel, an obvious departure from her bestselling 50 Shades series. A newly minted earl, Maxim Trevelyan mourns the loss of his elder brother while becoming romantically involved with his housekeeper, Alessia, a victim of human trafficking. Narrator Dominic Thorburn uses an aristocratic British voice for Maxim, managing to gently express his wonder while eschewing earnestness. Thorburn almost overcomes the tedium of Maxim's expletives. Narrator Jessica O'Hara-Baker treads the fine line between Alessia's naïveté and ignorance as she moves capably through an unremarkable plot. Volume levels transition seamlessly between narrators, although the switch from Maxim's first-person narrative to Alessia's third person is disconcerting. Both narrators differentiate British, Polish, and Albanian accents with admirable care. Piano music performed by Alessia plays softly behind the text, adding another layer to the audiobook. C.A. Winner of AudioFile Earphones Award © AudioFile 2019, Portland, Maine [Published: MAY 2019]