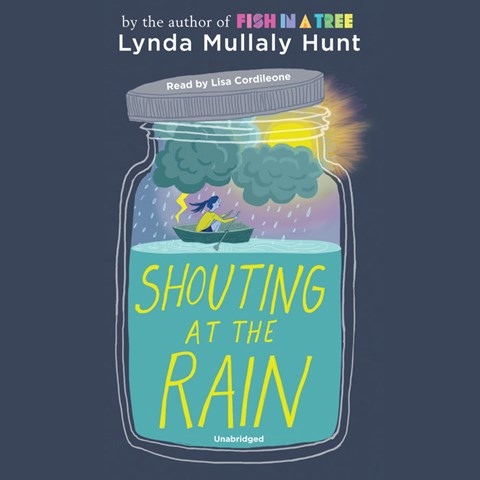 SHOUTING AT THE RAIN

Narrator Lisa Cordileone convincingly portrays both tween and adult characters, immersing listeners in the timeless story of Delsie, her grandmother, and their neighbors, who live in a coastal Cape Cod town. Delsie had been looking forward to summer with her best friend, Brandy, but this year Brandy has befriended a mean girl named Tressa. Tressa's bored drawl contrasts with the sincere enthusiasm in Delsie's voice, underscoring the listener's empathy with Delsie when they exclude her. As she befriends a new boy named Ronan, who is mourning his late mother, Delsie explores her mixed emotions about her own mother, who abandoned her. Cordileone also creates distinct voices for supporting characters, adding even more vividness to this relatable story of friendship, family, and small-town life. S.C. © AudioFile 2019, Portland, Maine [Published: JUNE 2019]