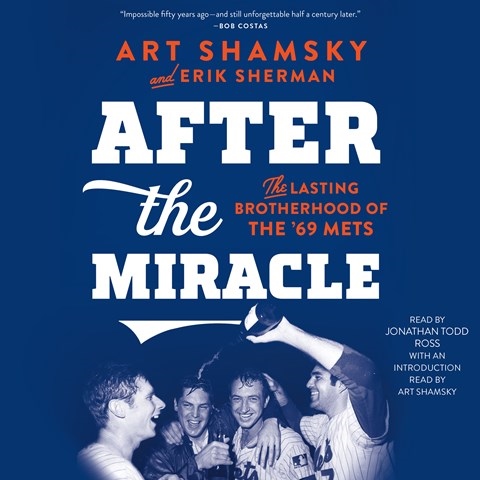 AFTER THE MIRACLE The Lasting Brotherhood of the '69 Mets

Jonathan Todd Ross narrates with enthusiasm as Art Shamsky brings together several members of the 1969 New York Mets to reminisce about the amazing season that would result in a World Series title. Ross never tries to imitate anyone and knows when to craft a serious tone. He tells the stories of players who put together an incredible pennant run, and his interest in every sentence keeps the listener tuned in. As Shamsky and several players make a pilgrimage to visit Hall of Fame pitcher Tom Seaver at his California home, Ross recounts the journey with verve. Ross's voice sounds completely engaged as he recounts stories of the winning team almost 50 years later. M.B. © AudioFile 2019, Portland, Maine [Published: MAY 2019]