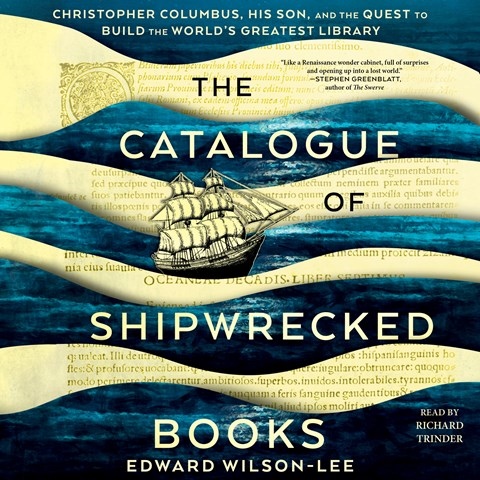 THE CATALOGUE OF SHIPWRECKED BOOKS Christopher Columbus, His Son, and the Quest to Build the World's Greatest Library

Audiobook lovers will take special pleasure in the ease and agility of Richard Trinder's narration of one of this season's most exacting texts. This history of the library assembled by Columbus's "natural" son, Hernando, is being compared to GALILEO'S DAUGHTER and THE SWERVE, and rightly, for opening a seemingly narrow window onto a broad view of an age. The prose is lively and evocative, and Trinder moves fluently through a range of languages and nomenclatures, and most wonderfully, through this book's amazing lists and catalogues. Cambridge historian Wilson-Lee (SHAKESPEARE IN SWAHILILAND) offers a fresh postimperialist perspective on the age of European exploration, the emergence of modern printing, modern libraries, and the concept of a global world--all narrated here with enormous grace, skill, and understanding. D.A.W. Winner of AudioFile Earphones Award © AudioFile 2019, Portland, Maine [Published: MARCH 2019]