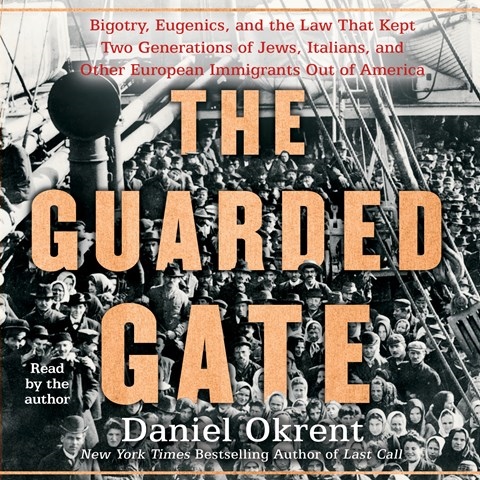 THE GUARDED GATE Bigotry, Eugenics and the Law That Kept Two Generations of Jews, Italians, and Other European Immigrants out of America

Daniel Okrent narrates his extensively researched work on the history of eugenics in the United States, illuminating a largely forgotten dark chapter of American history. Given the abundance of detail, Okrent's comfortably relaxed pace is beneficial as he thoroughly describes the birth of the American eugenics movement and its key figures. Okrent chronicles the movement's culmination--its codification of restrictive immigration laws in the 1920s that kept out those considered to be "inferior" by those in power--as well as the movement's connection to the coming rise of Nazism in Europe. Authors narrating their own works can be hit or miss, particularly with works of nonfiction, but, in this case, Okrent's knowledge of the material and his presentation are assets to the production. S.E.G. © AudioFile 2019, Portland, Maine [Published: JUNE 2019]