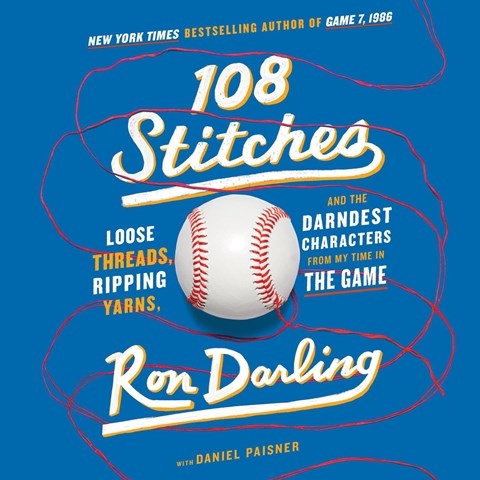 108 STITCHES Loose Threads, Ripping Yarns, and the Darndest Characters from My Time in the Game

More books have been written about baseball than any other sport, and audiobooks such as this allow the genre to flourish. Former pitcher Ron Darling, now a broadcaster, had a distinguished career, primarily with the New York Mets. Darling has met just about everyone in the sport for nearly four decades and demonstrates his knowledge and connections with the anecdotes in this entertaining memoir. Narrator Malcolm Hillgartner's relaxed delivery sounds as though he is in the broadcast booth with Darling. Like most audio sports memoirs, this book succeeds because of the narrator's engaging style. Hillgartner recognizes that even the duller moments in baseball are bolstered by the legacies of so many who have played the game, and were fortunate to have crossed paths with the author. D.J.S. © AudioFile 2019, Portland, Maine [Published: JULY 2019]