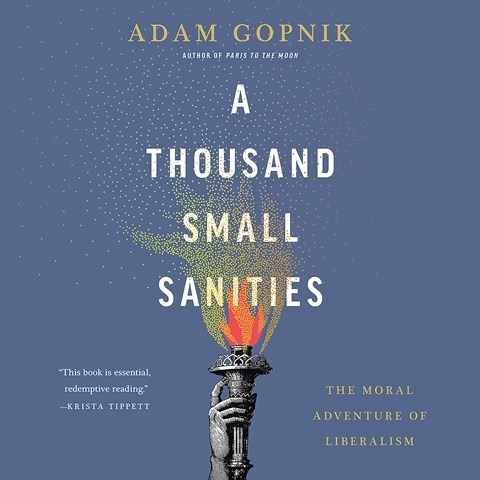 A THOUSAND SMALL SANITIES The Moral Adventure of Liberalism

Adam Gopnik's essay is presented as a letter to his teenage daughter, who was "shocked and troubled" by the election of Donald Trump in 2016, a reaction shared by many liberal Americans. That personal connection makes the NEW YORKER essayist a natural choice as narrator, and, indeed, his performance adds an air of authenticity to this audio. As he lays out his defense of liberalism--as opposed to leftist ideology--his pace is lively, his delivery is expressive, and his mild humor is delivered with a light touch. While Gopnik's arguments will no doubt be controversial in our increasingly polarized political climate, they probably shouldn't be. Indeed, the listener may be left wishing for a little more edginess and a little less intellectual meandering. D.B. Â© AudioFile 2019, Portland, Maine [Published: JULY 2019]