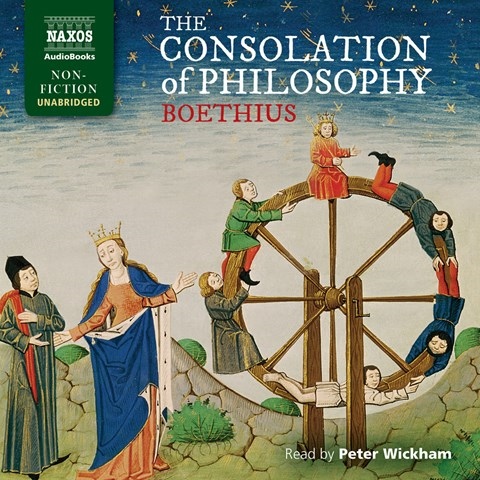 THE CONSOLATION OF PHILOSOPHY

by Boethius | Read by Peter Wickham

This audiobook was written by the Roman philosopher Boethius while he was awaiting sentencing and execution. One of the last great blooms of classical Greek Stoicism, it is a dialogue between the author and Philosophy, who appears as a woman who leads him to a proper Stoic acceptance of whatever his fate may be--even death. Narrator Peter Wickham maintains a clear, calm tone, as the philosophy requires, and makes the rather stilted dialogue as natural sounding as he can. The argument may or may not be convincing, but it is, in any case, a fine example of classical logic from late antiquity (524 CE). Boethius was ultimately enrolled in the list of martyrs as St. Severinus, having been executed shortly after he finished writing. D.M.H. © AudioFile 2019, Portland, Maine [Published: JULY 2019]