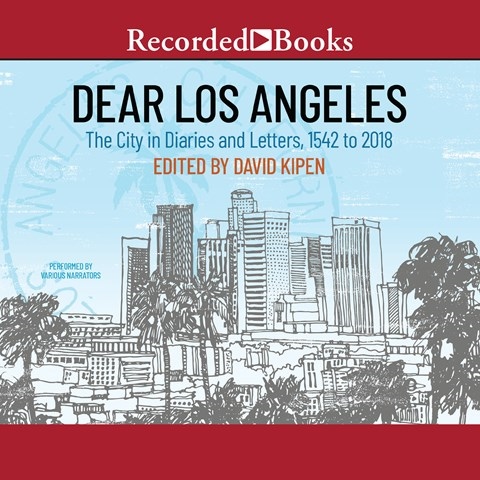 An ensemble cast, Tom Picasso, Jeanine Bartel, Richard Poe, Eva Kaminsky, Korey Jackson, Lynette Freeman, Luis Moreno, and book editor David Kipen, narrates from personal correspondence featuring the city of Los Angeles. The collection, arranged according to the calendar, weaves back and forth from the mid-16th century to the 21st. A diverse group of authors, including Helen Hunt Jackson and Allen Ginsberg, film titans, Spanish explorers, the naturalist John Muir--performed with an appropriate Scottish accent--and a wide range of intellectuals, as well as obscure but articulate letter writers and diarists from L.A.'s many ethnic neighborhoods, is featured in the very brief excerpts. Some matching of cast members to passages sounds more random than purposeful. However, all read clearly and at an easy pace for listeners to absorb the hundreds of moments in history described. F.M.R.G. © AudioFile 2019, Portland, Maine [Published: SEPTEMBER 2019]