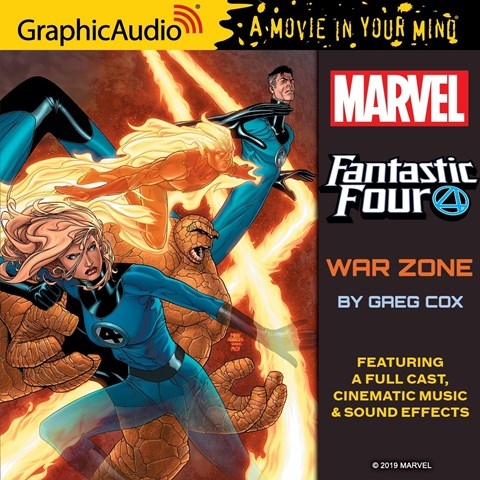 by Greg Cox | Read by Richard Rohan and a Full Cast

The hard-working folks at GraphicAudio once again make the difficult seem easy in their creation of a comic book made of sound. In just one audiobook, they do more with the Fantastic Four than three big-budget Hollywood films did. The characters sound like the Fantastic Four would sound, which is pretty hard to do--just look at The Thing in any of the films for comparison. Perhaps the production even goes a bit overboard on the ceaseless beeps, boops, and whirs that underscore the work. A little quiet background would not hurt. But the plot is impressive and worthy of the comic series. The Earth is being invaded by monsters from the Negative Zone, an antimatter dimension, and only the Fantastic Four can stop them. M.S. © AudioFile 2019, Portland, Maine [Published: APRIL 2019]