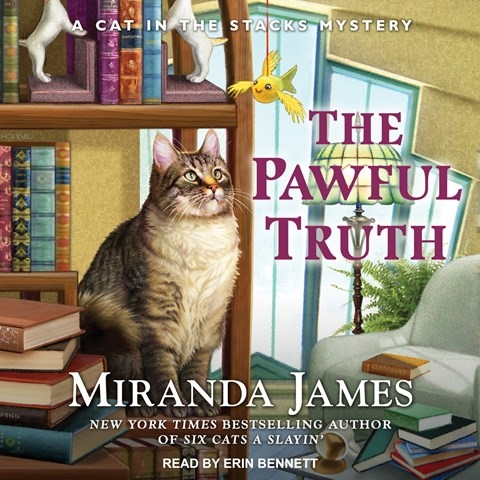 THE PAWFUL TRUTH Cat in the Stacks, Book 11

Narrator Erin Bennett energetically depicts Athena, Mississippi, a small town filled with endearing and eccentric residents, including librarian Charlie Harris. It's also a place with murders aplenty. Harris decides to indulge his interest in medieval history by auditing a class taught by the charismatic and handsome Carey Warriner. While at school, Harris overhears a heated argument between student Dixie Bell Compton and Warriner, and shortly afterward, Dixie is found dead. Bennett's descriptions of the quaint setting and the luscious food prepared by feisty housekeeper Azalea Berry are atmospheric, and most congenial are the appearances by felines Diesel and Ramses. Bennett's most convincing creation is strong-willed police officer Kanesha Berry, who is alarmed yet impressed when Harris puts himself in danger. S.G.B. © AudioFile 2019, Portland, Maine [Published: OCTOBER 2019]