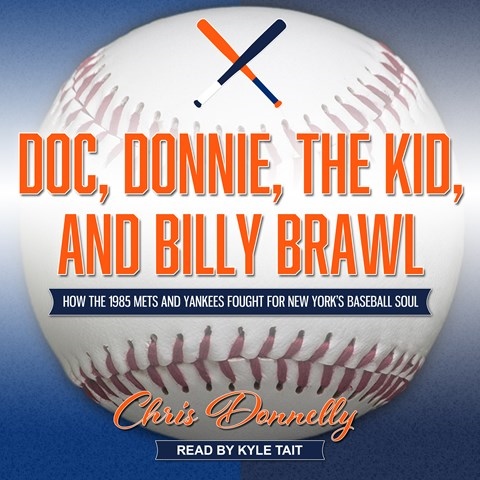 DOC, DONNIE, THE KID, AND BILLY BRAWL How the 1985 Mets and Yankees Fought for New York's Baseball Soul

Kyle Tait narrates this soap opera, lending a steady voice. Anyone who was a baseball fan in 1985 remembers the parallel race in New York: The National League Mets and their colorful cast, and the American League Yankees, whose owner George Steinbrenner lived for the spotlight. Tait never imitates anyone quoted, though he raises his voice a bit for Steinbrenner's frustrated, slightly angry tone when the owner is quoted. (It would be challenging NOT to speak Steinbrenner's words without those emotions.) Tait remains a consistent vocal bystander as he describes the lies, outrage, and fights that broke out regularly. The irony is that neither team would make the playoffs. Tait carries the cast, which includes pitcher Doc Gooden, catcher Gary Carter, and, of course, Steinbrenner and Yankees manager Billy Martin's contentious relationship. M.B. © AudioFile 2019, Portland, Maine [Published: AUGUST 2019]