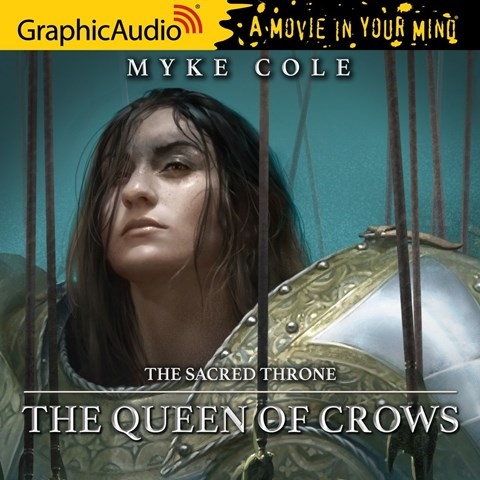 SACRED THRONE 2 The Queen of Crows

by Myke Cole | Read by Colleen Delany and a Full Cast

In this fantasy, Colleen Delany and a full cast recount epic battles between professional warriors and determined defenders of the realm. Heloise, the Queen of Crows, leads her people in fighting against the tyrannical Order and its religious zealots. She uses fierce courage, an indomitable spirit, and alchemically empowered armor to triumph in the revolution against the emperor and his minions. Delany's flowing performance employs a variety of British and European accents to differentiate clans and loyalties. Sound effects of marching, traveling, and bloodcurdling battles draw attention to the savagery of war. The palpable tension is broken by short interludes from the clanging swords and bloodlust that allow the action, and listeners' emotions, to settle briefly to a dull roar. M.B.K. © AudioFile 2020, Portland, Maine [Published: MAY 2020]