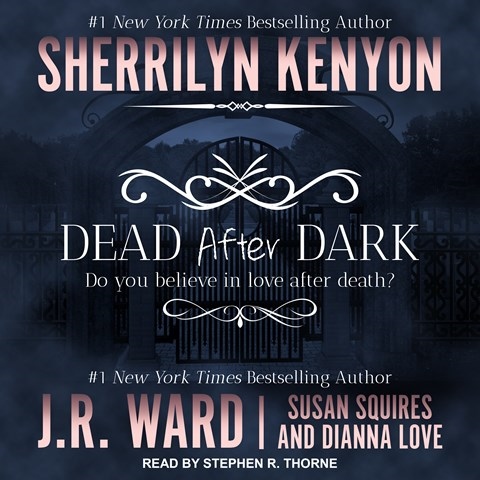 This story collection, narrated by Stephen Thorne begins with "Shadow of the Moon," in which Angelina and Fury, a werewolf, are enemies who are inextricably drawn to each other. In a husky, flirtatious voice, Angelina refuses to give in to Fury. His low and commanding tones, as delivered by Thorne, excite rather than scare her. "The Story of Son" pits lawyer Claire against a lonely vampire. Terror laces her voice, while the vampire is given a hypnotic Transylvanian accent. "Seize the Night" introduces Drew to a ghostly vampire named Freya. Her Eastern-European accent works well with his. In "Midnight Kiss Goodbye," Trey, a mind-reading supernatural federal agent, meets Sasha, a witch who is a P.I. Trey's low, deep-chested murmuring winds around Sasha's soft, sexy voice as the two solve a crime. A.M.G. © AudioFile 2019, Portland, Maine [Published: JUNE 2019]