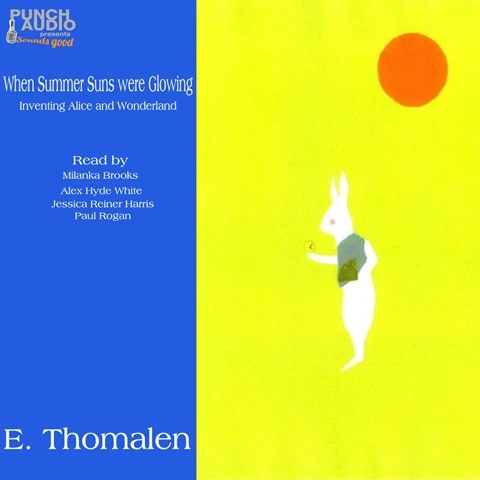 WHEN SUMMER SUNS WERE GLOWING Inventing Alice and Wonderland

This full-cast performance of Thomalen's dramatic adaptation re-creates a day that Charles Dodgson, better known as Lewis Carroll, spent with the three Liddell sisters, who inspired his books. As Paul Rogan portrays Dodgson, his enthusiastic, lighthearted tone fits the character perfectly. The contrast between his nervous stuttering in conversation and his confident storytelling makes Dodgson a likable character from the start. As he tells the Alice story, the other actors ably jump in to play the characters. Jessica Reiner-Harris plays Alice Liddell as well as the fictional Alice in the story, and she captures the girlish excitement and playfulness of both characters. The interchange between Dodgson and the Liddells realistically conveys their imagined conversation and makes the listener feel a part of the boating party. D.M.W. © AudioFile 2019, Portland, Maine [Published: AUGUST 2019]