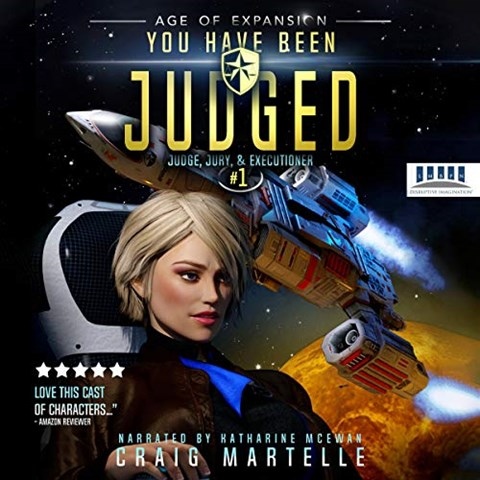 YOU HAVE BEEN JUDGED Judge, Jury & Executioner, Book 1

Narrator Katharine McEwan is the voice of Rivka Anoa, a magistrate who travels among the stars meting out justice. Thanks to some special abilities, she is able to determine the guilty from the innocent, combining the roles of judge, jury, and executioner into one. McEwan does an adequate job articulating the character's sass and groan-worthy sense of humour as she puts criminals in their place. But the unidentifiable accent she gives Rivka is often distracting, particularly when it starts to fade away at the end of conversations or monologues. Disappearing accent aside, Rivka's voice is distinct, unlike those of the other characters, who often blend together, occasionally obscuring who is speaking and disrupting the flow of the story. C.J.S. © AudioFile 2019, Portland, Maine [Published: AUGUST 2019]