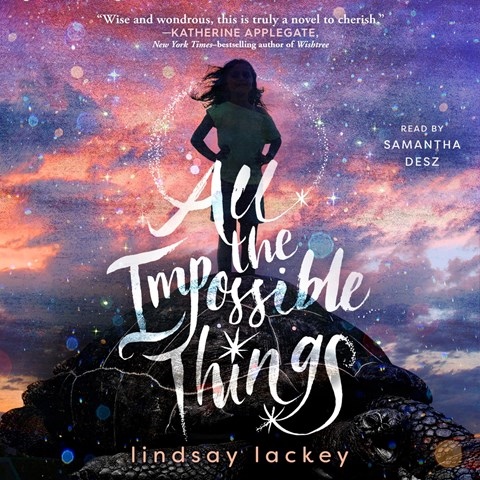 ALL THE IMPOSSIBLE THINGS

Narrator Samantha Desz's even pacing and tone reflect 11-year-old Red's tightly controlled exterior--but don't quite convey the turbulent storm of emotions thrumming inside her. After three unpleasant years in the foster system, Red is counting down the days until her mother's release from prison. At the same time, she tries to suppress her pain and anger over the incarceration because she creates literal storms when her emotions get out of control. Her new foster family is understanding, but Red is hesitant to open up, fearing more hurt and more storms. In spite of the element of magical realism, the action moves slowly. While Desz's calm narration mirrors the story's pace, in doing so it merely alludes to Red's heartrending emotions, rather than fully embodying them. S.C. © AudioFile 2019, Portland, Maine [Published: AUGUST 2019]