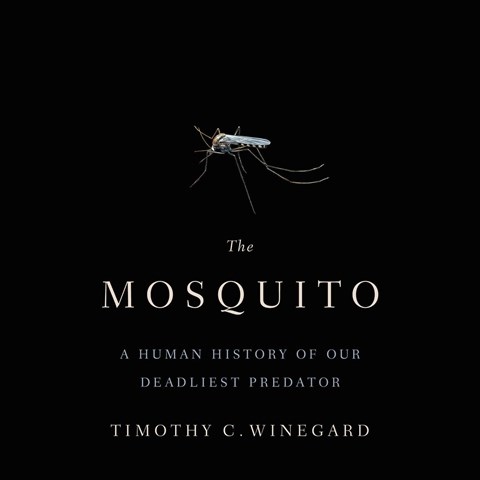 THE MOSQUITO A Human History of Our Deadliest Predator

Narrator Mark Deakins skillfully delivers this history of mosquitoes and their surprising effect on human civilization. Could mosquitoes have been the downfall of King Tut and the reason the Magna Carta was signed? Possibly, the author argues. Equally fascinating is the mosquito's well-documented influence upon the ancient Greeks and major Western wars such as the American Revolution and the American Civil War. Deakins's narration is sure to hold the listener's attention despite some flaws found on the page. For instance, the author at times bogs things down with scientific jargon but then cheekily anthropomorphizes the mosquitoes as if they were characters in a story. But Deakins's winning voice draws attention away from this inconsistent approach, much to the benefit of audiobook listeners. A.T.N. © AudioFile 2019, Portland, Maine [Published: SEPTEMBER 2019]