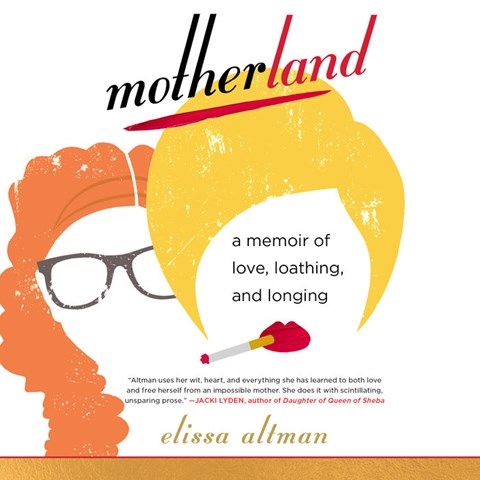 MOTHERLAND A Memoir of Love, Loathing, and Longing

This memoir about a midlife lesbian writer and her aging mother is narrated with skill and nuance by the author. As Elissa Altman grew up in New York City in the 1970s in the shadow of her magnetic and narcissistic mother, Rita, the two developed a volatile codependent relationship. Rita sought validation in extreme ways, including an obsession with makeup and clothes, and Altman faced Rita's vexation when she didn't fit those ultrafeminine standards. Decades later, Rita suffers an accident that leaves her bedridden, and Altman must reckon with the realities of an aging parent whom she loves and resents in equal measure. Mental and physical illness and family drama are brought to life with great sensory detail, and Altman's narration is utterly compelling. S.N. © AudioFile 2020, Portland, Maine [Published: JANUARY 2020]